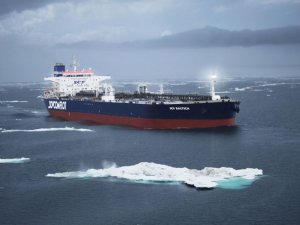 The privatisation of a 25 percent stake in Russian state shipping firm Sovcomflot may be equally split between existing and new shares, two sources close to the deal told Reuters on Friday.

The stake sale in Sovcomflot, Russia’s biggest shipping company whose vessels support offshore oil and gas operations, is part of a wider state asset sale aimed at plugging holes in the state budget.

The source said which option would be selected would depend on how much revenue the state wanted to gain from the sale.

A second source, who is familiar with the deal, also said that the option of an equal split between new and existing shares was being considered.

If that is the option chosen, “it would be good for investors to see that shares they invested in are ‘cash in’, for development,” the second source said.

In response to questions from Reuters, the Economy Ministry, which is overseeing the privatisation, said it was “currently waiting the report of the agent with preliminary recommendations on the deal. At the moment it is premature to talk of any options for the deal.”

A spokesman for Sovcomflot, asked by Reuters to comment, said it is up to the state, as shareholder, to decide on the terms of the stake sale.

Both sources said the stake sale could take place either this autumn or next spring, but that the timing was still under discussion.

Also under consideration was the location for the sale, with Moscow and New York bourses the options.

The first source said that the placement is likely to take place in Moscow and in the spring, after markets normalise in the wake of any turbulence that might follow the U.S. presidential election.

“There are no arguments for a placement in New York, apart from showing off. The government is not very fond of this idea,” the first source said.

The Russian economy ministry has previously said it wanted to raise 24 billion roubles ($380 million) from the sale of the Sovcomflot stake.

This news is a total 13913 time has been read
Tags: Russian Shipping Company Sovcomflot Puts Large Stake Up for Sale