Russian submarines to get unguided shells to break ice 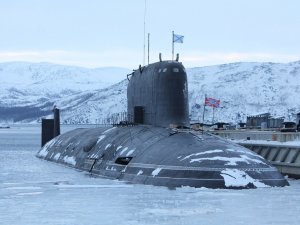 Rocket-propelled projectiles to break ice drifts have been designed and are tested for the latest Russian nuclear submarines. They create a hole for the submarines to strike. Under-ice navigation and surfacing are the most complicated elements.

A mistake can damage the sub or it will get stuck in the ice. New projectiles will expand the capabilities of Russian nuclear submarines, the Izvestia daily writes.

The new projectiles are tested on submarines of Borey-class project 955 and Yasen-class project 885, sources in the Defense Ministry said. The unguided rocket-propelled munitions confirmed the ability to break any ice drift. The projectiles are necessary to ensure underwater missile launches and to surface floating rescue capsules and evacuate a crew in distress. Submarines can engage the projectiles under ice and in a surfaced position, the sources said.

The first trials of the new munitions were held in the summer of 2014. They were fired without a warhead, but with an operating engine.

"Nuclear submarines have to operate in any situation. They cannot depend on the environment," Rear Admiral and former submarine commander Hero of Russia Vsevolod Khmyrov said.

"Upon receiving an order to fire, they have to fulfil it as soon as possible. Ice should not be an obstacle. Making a hole in it is a tactical technique for a timely missile strike. A submarine can break the ice with its hull, but risks to be damaged. If time allows, the subs seek for existing holes or sail to clear water," he said.

The Arctic Ocean is an important region for submarine operations, expert Dmitry Boltenkov said. "Sailing under the Arctic ice is dangerous, but provides clear advantages. Satellites, airplanes and helicopters do not see the submarines and it is useless to drop acoustic buoys, as they will fall on the ice. Therefore, it is impossible to detect a submarine under ice," he said.

Besides, submarines can covertly approach Alaska under ice or bypass Greenland from the north and enter the Atlantic, he added.

The Soviet Navy used ordinary torpedoes to break ice. However, they were not effective as expected. The command realized new means were necessary.

At present, all nuclear submarines train sailing in and under ice. The United States trains submariners differently. They have to fulfil one combat mission in case of a war, as a rule. Therefore, not all submariners are acquainted with Arctic navigation. However, the US Navy has intensified training in the Arctic and adjacent seas of late.

The military and economic significance of the Arctic has increased of late. Global warming and decreased ice make the Northern Sea Route more profitable against other routes between Asia and Europe. It can potentially transport a half of all Euro-Asian cargoes. The trade turnover is estimated in hundreds of billions of dollars.

US officials claim the Northern Sea Route should be open for the whole world community. In 2018, the French Navy’s Rhone assistance vessel sailed it without notification. The captain said it was necessary "to expand the knowledge of the region," the Izvestia said.