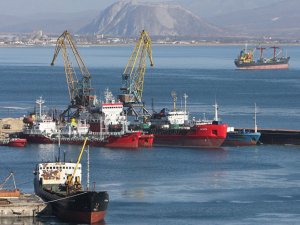 Earlier on Saturday, a spokesperson of the port authority of the Russian city of Nakhodka, located on the country's Pacific coast, said that the blast, which claimed the lives of at least two people, took place on board the Zaliv Amerika oil tanker.

The local news website VL.RU has published a video of the consequences of a gas blast on board a tanker in Nakhodka Bay in Russia's Far East in the early hours of Saturday.

In the footage, white smoke is seen billowing from the upper deck of the tanker as two nearby tugboats attempt to extinguish it.

A separate video showed damage on the tanker’s deck, with apparent tanker crew talks also heard, including the crewmembers’ request for help.

Earlier in the day, the regional branch of the Russian Investigative Committee said in a statement that at least two people had been killed in the gas explosion.

A spokesperson for the Nakhodka port authority identified the oil tanker as the Zaliv Amerika. Investigators have already launched a criminal case over the incident.

This news is a total 603 time has been read
Tags: Russian Tanker Damaged