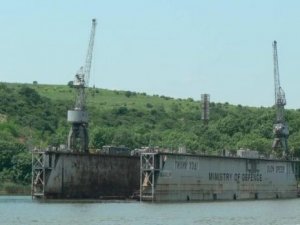 The vessel was docked for maintenance and repair works, but caught fire after explosion in fuel tank compartment. The accident was immediately reported to the local authorities and at the scene were sent firefighting teams. There are no reports about injuries and gassing of the region. The local authorities initiated investigation for the root cause of the accident and was formed crisis center to assess the situation. The name of the tanker was not revealed, but according to the local media there are three Russian tankers at the docks, but there is no danger fire to extend to nearby ships.

The firefighters are working to get control over the flames and to extinguish the fire. On-site arrived teams from the firefighting department and police, which will help with investigation.

There is no danger for the population in vicinity, as all are not carrying dangerous cargo.

This news is a total 1181 time has been read
Tags: Russian tanker exploded at ship repair yard in Bulgaria