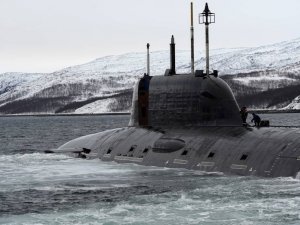 The Project 885M Yasen-M class nuclear-powered attack submarine Kazan (NATO reporting name: Severodvinsk-class) has launched torpedoes against a surface and an underwater target during its trials in the White Sea, the Defense Ministry’s press office said.

"The test-firing was conducted at a special sea range of the Northern Fleet. Ships and vessels from the Belomorsk naval base closed off the area for shipping. The surface target was hit," the press office said.

"Besides, the Kazan submarine’s crew fired a salvo of two torpedoes to hit a simulated enemy’s submarine," the press office added.

The trials of the advanced Kazan nuclear-powered submarine in the White Sea will last through mid-December.

The Kazan lead submarine is being built under the updated 885M project. It was laid down on July 24, 2009. Under the contract, the submarine was planned to be delivered to the Russian Navy in 2017. Now, its handover is scheduled for 2020.

Project 885 and 885M nuclear-powered submarines armed with fourth-generation cruise missiles are designed to destroy the enemy forces’ surface and underwater targets and hit their ground objectives.

Submarines of the type have a full displacement of 13,800 tons, a submersion depth of 600 meters and an underwater speed of about 30 knots.

The submarine has a hybrid design with the light hull covering the strong hull in the nose to decrease the noise level.

Project 885 and 885M submarines are the first vessels to have torpedo systems beyond the control post compartment rather than in the nose. They are armed with Oniks (SS-N-26 Strobile) and Kalibr (SS-N-27 Sizzler) cruise missiles and a powerful torpedo-missile system.