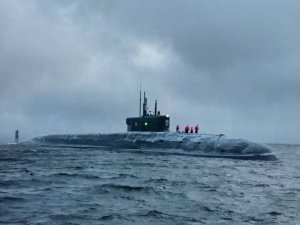 The advanced Project 955A nuclear-powered ballistic missile submarine Knyaz Vladimir has completed the cycle of its state trials at Northern Fleet training ranges in the White Sea .

"During the trials, the seamen held torpedo firing against an underwater and a surface target in the White Sea. Besides, the Knyaz Vladimir submarine’s crew performed the first test launch of a Bulava [SS-NX-32] sea-based intercontinental ballistic missile from the White Sea towards the Kura training range in Kamchatka [in Russia’s Far East]," the press office said.

The test firing was supported by the Belomorsk naval base.

The Knyaz Vladimir nuclear-powered ballistic missile submarine was built under the improved Project 955A.

The fourth-generation Project 955 nuclear-powered submarine is designed for elimination of the enemy’s strategic land targets and for tactical missions, in particular, antisurface and antisubmarine operations. The submarine embodies advanced shipborne radio electronics and design solutions improving the hull’s hydrodynamics and slashing the noise.

The submarine is equipped with a surfacing escape chamber for the whole crew.