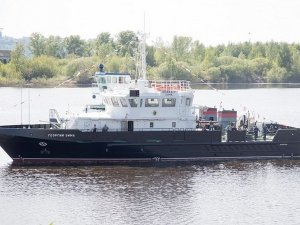 The ceremony will take place at the Vyborg Shipyard in northwest Russia, the press office added.

"In August 2019, the modules for the boat were loaded on trucks at the KAMPO Company in the Moscow Region and were transported to the Vyborg Shipyard for its final assembly," the press office added.

Under the program, manoeuvrability and seaworthiness of the boat and the operation of its systems and mechanisms were tested at the final stage of the trials. At the end of the trials, the state commission chairman signed the acceptance report.

The project 23370G multifunctional modular hydrographic boat has been developed on the basis of projects 23370 and 23370M boats, which the KAMPO enterprise is building in the interest of search and rescue forces of the Russian Navy and which have already proven their efficiency.

The Mikhail Kazansky large hydrographic boat is unique due to the catamaran-type design of its hull, which has significantly increased the usable space on the deck to accommodate hydrographic equipment. Three hydrographic boats of the type are expected to be delivered to the Navy’s hydrographic service by the end of 2020.

This news is a total 362 time has been read
Tags: Russia’s Navy, Mikhail Kazansky US Navy reports three coronavirus cases onboard aircraft carrierThree sailors aboard the US Navy’s aircraft carrier USS Theodore Roosevelt underway in the Pacific Ocean were diagnosed with COVID-19 and were evacuated from the ship, Acting Navy Secretary Thomas B. Modly said.