RWE, Ciner to partner in energy 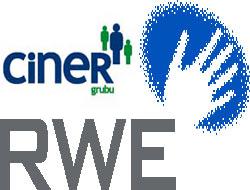 The German group, which founded RWE Holding in Istanbul, has issued a letter of intent to purchase an undisclosed amount of shares in energy companies owned by Ciner Group. After the two groups sign a conclusive stock selling agreement, they will form a joint venture in the electricity generation sector in the Turkish market.

?[RWE Holding] was founded in order to provide developed techniques for planning, production marketing, finance, personnel and fund management departments for the companies it assists in capital and management tasks.? This is described as the aim of the company that was founded Feb. 5 with a YTL 1.7 million capital. Helmut Kempf serves as the chairman of the company, while Sami Demirbilek, a former undersecretary of the Ministry of Energy and Natural Resources, and Andreas Schuck serve as board members.

The electricity partnership deal with Ciner Group, if signed, will also enable RWE to have a say over the control of the Çöllolar coal basin, which feeds Af?in-Elbistan plants. Ciner Group acquired this basin after a tender in 2007. Prior to this tender, RWE made an offer to the Energy Ministry and requested to take over control of the basin without a tender. The offer included forming a public-private sector consortium via partnership with state owned electricity production company EÜA?. RWE's offer at the time also included establishing a C plant for Af?in-Elbistan and rehabilitation of the A plant, but it was not accepted. The company is also keeping a close eye on the electricity distribution and generation privatizations inTurkey.

RWE with its headquarters in Essen is an electricity and gas company with over 29 million electricity and 10 million gas customers. It is the largest electricity company of Germany and has investments in the Czech Republic, the United Kingdom, Hungary and the Netherlands.

The company, which has natural gas pipelines longer than 100,000 kilometers, is also investing in the liquefied natural gas (LNG) sector. During the 2006 ? 2007 period, RWE attracted Gazprom's attention as well and the Russian company expressed some interest in the company.

RWE also signaled that it was open to joint investment projects with Gazprom in Germany. It was recently admitted as the 6th member of Nabucco Natual Gas Pipeline Project, which was created as an alternative to natural gas imports exclusively from Russia. Thus RWE, in the Nabucco race, surpassed companies such as German E.ON, French Gaz De France and Total. The other shareholders in the Nabucco Gas Pipeline International GmbH, established in 2004, include Austria's OMV, Hungary's MOL, Romania's Transgaz, Bulgaria's Bulgargaz and Turkey's Bota?.

This news is a total 3340 time has been read