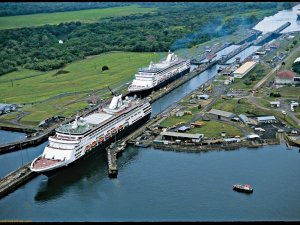 A consortium led by Spanish-builder Sacyr (SCYR.MC) said it has won a $233 million (149.57 million pounds) settlement in a dispute over cost overruns in an expansion of the Panama Canal, half what the group had been seeking in the lawsuit.

The GUPC consortium, which also includes Italian builder Salini Impregilo (SALI.MI), Belgium’s Jan de Nul and Panama’s CUSA, said in a statement that a resolution panel had also ruled the group has another six months to finish a project for the lock system.

The consortium has filed a series of claims totalling some $2.3 billion over the dispute that halted work early last year on the expansion to allow bigger vessels to pass through the canal.

This suit was for a $463 million claim by the consortium related to cement quality.
The government-run Panama Canal Authority said on Thursday in a statement that it was still deciding whether to appeal.

The construction group is now expected to finish work by early next year, with the deeper canal slated to begin operation in the first quarter of 2016.

This news is a total 1700 time has been read
Tags: GUPC, CUSA, Italian, Panama Canal, system