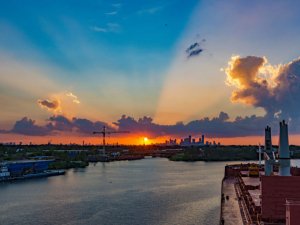 Note: Below is a Safety Alert distributed at the request of the U.S. Coast Guard’s Office of Investigations and Analysis following a series of fuel system issues impacting several of vessels which had bunkered in Houston, Texas.

One fuel analysis company has even called the problem one of the most widespread fuel quality issues in recent years after it identified at least 30 vessels suffering some sort of fuel burn issue, such as sticking fuel plungers, fuel-pump seizures, and other failures, after burning what has been identified as contaminated bunker fuel not connected to any one supplier or barge.

We’ve all experienced bad gas, but how about IFO 380?

(USCG Office of Investigations and Analysis) This safety alert raises awareness of a significant emerging problem in the U.S. Gulf Coast region regarding contaminated vessel fuel oil bunkers. This involves blended fuels oil such as Intermediate Fuel Oil (IFO 380) and has caused fouled fuel pump plungers, fuel pump seizures and other fuel system related failures. Furthermore, the fuel may increase sediment levels at separators and fuel filters and, in some cases, may completely clog filters. The standard fuel oil test methods found in the ISO 8217 specification will not detect these underlying problems.

One fuel testing organization that performed marine fuel analysis on affected vessels that experienced fuel oil system problem found that phenolic compounds and long chain fatty acids were present in the fuel. Another fuel testing organization identified similar contaminants in fuels they sampled. The contaminant was identified as phenolic compound 4-Cumyl-Phenol (CAS No. 599-64-4) and all fuel oil samples were found to be in the concentration range of 300ppm to 1,000ppm. This 4-Cumyl-Phenol has many industrial applications due to its adhesive qualities including the manufacture of epoxy resins as well as is used as an emulsifier in pesticides. Sampling and analysis has determined this contamination is not limited to one fuel supplier but exists across many. No definitive source has been identified but it’s presumed to be associated with the use of fuel oil cutter stocks. Cutter stocks are generally lighter petroleum products that are added to heavy fuel to reduce its viscosity.

This fuel oil contamination could lead to engine failures and associated losses of propulsion potentially having catastrophic and wide-ranging consequences. The presence of these substances within the fuel is in violation of MARPOL Annex VI regulation 18.3 and Clause 5 of ISO 8217 which indicates the fuel shall not include any added substance or chemical waste which jeopardizes the safety or adversely affects the performance of the machinery; or is harmful to personnel; or contributes overall to additional air pollution.

One fuel testing organization makes the following recommendations to vessel owners and operators:
* Pay attention to the terms of the bunker requisition.
* Specify that the fuel must be absent of abnormal components.
* Determine the acid number of the fuel.
* Carefully pay attention to the fuel supply and fuel injection equipment onboard the vessel.

The Coast Guard recommends that vessel owners and managers ensure vessel operators are made aware of this potentially hazardous condition, closely monitor fuel oil system components and consult their bunker suppliers and other technical service providers regarding this issue.

This news is a total 952 time has been read
Tags: Safety Alert – Bad Bunker Fuel Causing Problems for Vessels on U.S. Gulf Coast