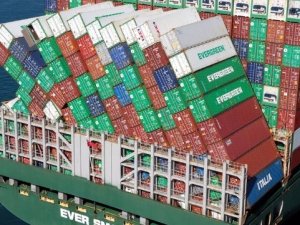 The detailed report finds that Evergreen needs to enhance its safety operations, including recommendations for maintenance, education on heavy weather conditions, and improved use and adherence to planning tools onshore and aboard ship.

The accident, which resulted in 42 containers being lost overboard and another 34 being damaged, began after the UK-registered Ever Smart departed Taipei, Taiwan on her regularly scheduled voyage to Los Angeles. According to the report, the ship sailed on October 26, 2017, initially maintain a speed of 18 knots but the day after departure the captain aware of heavy weather steered the vessel further south to avoid the worst of the weather on his route.

Three days after departing Taiwan, the winds increased to force 8 (34-40 knots) and with the ship heavily rolling and pitching in the increasing seas the captain ordered heavy weather procedures. This included closing weathertight and watertight doors and confiding the crew to the accommodation block. The ship’s pitching and shuttering increased with a roll of 10 to 12 degrees prompting the captain to decide to slow the vessel to 16 knots.

With the weather subsiding, the captain ordered an inspection of the cargo lashings late on the afternoon of October 30, at which time they discovered the containers in the aft most bay has collapsed. They also observed that three containers were hanging over the side of the ship, but with darkness approaching it was determined that a complete inspection could not be made till the following morning. At that time they determined that 42 containers were missing including two of the three that the prior evening had been hanging over the side of the ship were now gone. The Ever Smart proceeded to Los Angeles where she arrived on November 8. Investigators from MAIB conducted a detailed inspection of the ship in Los Angeles along with surveyors from Lloyd’s Register the ship’s classification society.

The detailed report reviews the conditions and decencies identified on the ship and with its containers and loading. The inspectors reported finding broken twistlocks and bent lashing rods and turnbuckles close to the damaged containers as well as corroded twistlocks. Also several of the lashing rods inspected were found to be slack. Maintenance of the twistlocks by the ship’s crew was also termed problematic in the report.

The report concluded that several factors contributed to the accident including issues with the container weight distribution, lashing arrangements, and the ship’s motion. The stow collapse the report says was probably initiated by a lashing system or structural container failure. They found failures with the container stowage plan, container weight distribution, not lashing in accordance with instructions, and lashing rod turnbuckle locks that had not been applied. Additionally, the ship’s loading computer was not fully utilized and warnings regarding limits were not acknowledged or ignored.

The report concluded that the master’s course and speed alterations were effective. However, hull vibrations probably resulting from whipping forces transferred through the hull as the ship’s bow slammed into the sea and stern shaking, along with the gale force winds, were also cited as contributing factors.

MAIB’s recommendations to Evergreen focused on three areas. First highlighting to masters the increased risk of cargo damage from hull slamming and stern shuddering in heavy weather. They also called for an inspection program for lashing equipment and training and processes to ensure shore planners use the ship’s loading computers. The report also highlights the importance of checking permissible load limits for containers and lashing systems.

The nearly 100-page report provides a detailed review of the ongoing issue of container losses at sea. A recent report from the World Shipping Council (WSC) finds that the incidents of containers lost overboard have been on the decline and is a small percentage of the total annual volume of containers transported at sea. Despite these findings, there have recently been several incidents including the APL England’s recent loss of containers off Australia. Also Mediterranean Shipping Company is currently working to respond to the loss of 22 containers from its vessel the MSC Palak in heavy weather off South Africa just two weeks ago.

The Australian Maritime Safety Board also announced that starting in August it will be conducting mandatory inspections on all container ships arriving in Australian ports looking at the cargo stowage and gear as well as crew education.

The complete report on the Ever Smart is available from the Marine Accident Investigation Branch.

This news is a total 2751 time has been read
Tags: Safety and Maintenance Issues in UK Report on Evergreen Container Loss