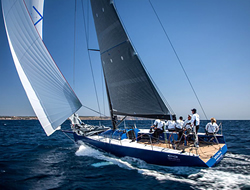 Setting out to build an ultra-high-performance cruising monohull, Danish Yachts has joined forces with Infiniti Yachts with an exclusive agreement to build the Infiniti 100S, featuring the patented Dynamic Stability System (DSS) by Hugh Welbourn.

The superyacht was officially unveiled in Palma by Danish Yachts, Infiniti Yachts and the exclusive worldwide sales partner Yachtzoo based in Monaco and Fort Lauderdale. Beyond going through tank testing and data analysis, the DSS technology has been put to the test on the water with two smaller 36-foot sisterships, both of which raced at the 2013 Palma Vela Regatta.

This marks the first time that a yacht has been designed around the system’s retractable foil with the Infiniti 36 and moving forwards to the Infiniti 100S. Extending from the leeward side, the foil creates progressive dynamic lift, reducing pitching and heel angle and increasing stability, which increases comfort and performance. The 100S is predicted to sail comfortably at speeds well in excess of 20 knots.

It’s not just about performance though, the 100S is designed to be stylish, too. The foil is located below the cabin sole and does not infringe on interior living space. Accommodating three en suite cabins for guests and four crew, the interior will have the Danish touch with a bright open layout similar to the yard’s award-winning AeroCruiser 38m motor yacht Shooting Star. The first 100S is due to launch in late 2014.

This news is a total 6711 time has been read