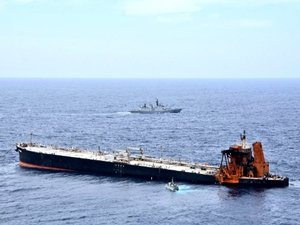 Two weeks after the joint teams from India and Sri Lanka were successful in dowsing the fire aboard the VLCC New Diamond, the salvage crews are still working on a plan for the ship.

They are looking for a port and a means to off load the cargo of 270,000 tonnes of crude oil aboard.

Speaking to the media in India, Shrikant Madhav Vaidhya, who is chairman of the Indian Oil Company, said that the salvage team is still searching for a port for the burnt out tanker.

The tanker was operating on charter to the Indian Oil Company when the fire broke out on September 3.

It took a week to put out the fire which spread from the engine room to the deck house.

The teams had succeeded in putting out the fire only to have it reignite due to the heat on the vessel and high winds in the area.

Vaidhya said that the salvage team, SMIT Singapore Pte, is managing the efforts.

SMIT will decide on towing the vessel to a location for the transfer of crude oil to another ship. Ultimately, he expects that the crude oil shipment will still reach the company’s oil refinery.

Among the challenges that they are dealing with is an oil slick that formed from engine room leaks in the ship’s diesel fuel supply.

The Sri Lanka Airforce has been called on to drop dispersants on the oil slick that was seen behind the ship.

Fearing a potential environmental disaster, Sri Lanka had previously ordered the vessel to leave its waters and said that it did not want the tanker towed to its ports.

Vaidya told the reporters that India had offered its ports as a possible destination for the tow but that it was not certain the vessel would be towed to India.

He cautioned that the process would take time and said it might be two months before the oil reached India’s refinery.

Separately India’s ministers of foreign affairs and for petroleum and gas met to discuss ways of expediting the removal of the cargo from the tanker.

They all also continued to emphasize that the ship remains safe and stable. They believe that the crude oil cargo is in no immediate danger.

This news is a total 2764 time has been read
Tags: Salvage Team Still Working to Get Burnt-Out VLCC Tanker to Port