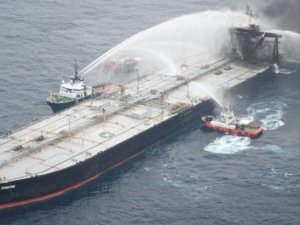 The fire-damaged tanker New Diamond is 'stable and safe' at a position about 50 nautical miles off the coast of Sri Lanka, the Indian Navy reported Sunday.

The salvors are still working on deballasting the vessel and blanking an underwater non-return valve, according to the Indian Navy.

The fire aboard New Diamond broke out on September 3 when a boiler exploded in the vessel's main engine room.

One crewmember was killed in the blast, and 22 survivors were rescued safely.

The fire burned throughout the deckhouse, and the effort to bring it under control was initially complicated by poor surface conditions and unfavorable winds.

Salvage teams then boarded the vessel to begin the process of assessment, dewatering and rigging for tow.

The New Diamond released an unknown quantity of bunker fuel into the water after the fire, but her cargo tanks are intact.

The fuel spill left a 1-2 nautical mile slick behind the ship as she was towed away, and an Indian Coast Guard aircrew addressed it using dispersants. Sri Lanka's Marine Environment Protection Authority (MEPA) is considering legal action against the shipowner in connection with the fuel spill, according to deputy general manager Jagath Gunesekara.

The tug Boka Expedition, which was recently deployed to Mauritius for the Wakashio grounding response, took over the tow on September 13.

The New Diamond is laden with 270,000 tonnes of crude, and Sri Lanka's MEPA has expressed opposition to granting her access to a port of refuge over pollution concerns.

A fully laden VLCC typically draws about 22 meters of water, and Sri Lanka has one harbor - Trincomalee - with 25 meters of depth.