Salvors Prepping to Raise SEACOR Power in Gulf of Mexico 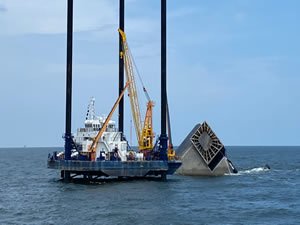 The Coast Guard reported Friday that a salvage crane was working to remove debris from the site while divers were prepping lift boat to be raised.

A salvage team is continuing preparations to raise the sunken Seacor Power lift boat in the Gulf of Mexico.

Crews last month completed the removal of approximately 20,363 gallons of diesel fuel from the SEACOR Power using the hot tapping method, which involved drilling into the fuel tanks, making a hose connection, and transferring the fuel to portable tanks.

Remaining on board is approximately 4,500 gallons of hydraulic fluid in tanks that are inaccessible but not comprised, so therefore it will remain on board until after the vessel is raised.

The Coast Guard reported Friday that a salvage crane was working to remove debris from the site while divers were prepping lift boat to be raised.

The SEACOR Power capsized during a severe squall shortly after departing Port Fourchon, Louisiana on April 13 with 19 people on board.

The accident remains under investigation by the National Transportation Safety Board (NTSB) and Coast Guard, however a preliminary report published in May by the NTSB revealed the SEACOR Power’s crew decided to lower the vessel’s legs to the seafloor to ride out a squall.

The vessel capsized as the helmsmen was attempting to turn the Seacor Power into the wind as the legs began to descend.

The lift boat is owned and operated Houston-based SEACOR Marine and was chartered to Talos Energy at the time of the accident.

The SEACOR Eagle, another SEACOR Marine-operated lift boat, is being utilized for the salvage operation.

There remains a Coast Guard safety zone covering a one nautical mile radius around the incident site in effect until June 15. A timeline for the refloating operation has not been provided.