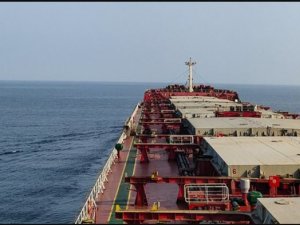 The South African Maritime Safety Authority (SAMSA) is working with South African Police Services on an investigation into an alleged throwing overboard of two stowaways by the crew of a foreign cargo vessel off South Africa.

SAMSA said that the two men from Tanzania, believed to be stowaways, had reportedly been forcibly removed from a Panama flagged bulk carrier named MV Top Grace, after the vessel sailed off the port of Durban on March 28, 2020.

“It is alleged that the two stowaways had boarded the vessel “Top Grace” which was berthed at Maydon Wharf in Durban on Monday 23th March 2020 by climbing up the mooring ropes and hid in the chain locker,” SAMSA said.

“When they were discovered hiding on the ship, after it had set sail, they alleged that they were thrown overboard with a make-shift raft, life jackets and some bottles of water. The Tanzanians claimed they spent two days at sea before washing out at Zinkwazi beach on the North Coast of Kwa-Zulu Natal.”

Once informed of the incident, the authorities detained the ship in Richards Bay, where it remains berthed.

Seven crew including the ship’s master were taken into police custody and charged with attempted murder before being released on bail.

They have since appeared in court while official investigations are continuing, said SAMSA.

The crew members were allowed to return to the vessel until their next court appearance.

“SAMSA has also conducted its own investigation and has shared such with the SAPS to assist with their ongoing investigation. SAMSA would like to warn vessels sailing through its territorial waters that any vessels found to have transgressed South Africa’s national laws, will be held accountable to the fullest extent of the law,” SAMSA said.

“The South African Maritime Safety Authority will continue to monitor all vessels calling at South African Ports or sailing through its territorial waters to ensure that its mandate of protecting the marine environment from pollution and saving lives and property at sea. SAMSA implores all vessels and ship managers to act responsibly during this period of uncertainty.”

This news is a total 780 time has been read
Tags: SAMSA , Stowaways