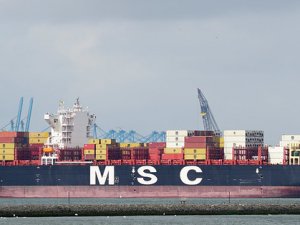 On 22 July, the boxship operated by Swiss Mediterranean Shipping Company (MSC) was released from the Indian Ocean Port of Ngqurha.

Exactly a week ago, MSC Palak was arrested after 22 containers fell overboard from the ship while it was battling stormy weather near the city of Port Elizabeth, Eastern Cape, on 14 July.

According to SAMSA, a salvage operation in which the shipping company MSC also participates, has been successful so far in relocating some debris to facilitate safe passage of ships in the area.

“The salvage operation currently in progress involves SAMSA, the vessel’s Insurance, Department of Environment, Forestry and Fisheries (DEFF), Transnet National Ports Authority (TNPA), the vessel owners, MSC and local clean-up services providers. They have been working tirelessly to salvage what is left of the containers that came adrift during the incident,” SAMSA said in a statement.

“Aerial surveillances have been carried out to spot the drifting debris along the coast and salvage crews using boats have towed the spotted debris to a safe place such that it poses minimal risk to ships navigating along the coast.”

As informed, MSC accepted financial responsibility for any clean up that may be required in the bay and areas in the vicinity for the next five years if deemed to be linked with the incident.

Built in China 2016, the Post-Panamax boxship MSC Palak is owned by China’s Bank of Communications and commercially controlled by MSC, data provided by VesselsValue shows.