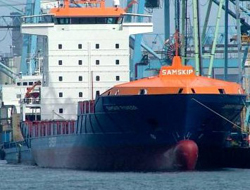 Samskip Reefer Logistics has signed a "vital" agency agreement that will move the company into the Japanese market for the first time.

Samskip Reefer Logistics has signed a "vital" agency agreement that will move the company into the Japanese market for the first time. Samskip has appointed Interocean Shipping Corporation, a Tokyo-based agency organisation, to represent the company. Japan is one of the world's most vital and demanding perishables and frozen fish markets.

The agreement is the next in a string of deals which has seen the Icelandic company open branch offices in Qingdao and Dalian, Pusan and Seoul, and Ho Chi Minh City.

Interocean CEO Mr Kitamura said: "We are pleased to be part of the Samskip agency network. In the past, Interocean has cultivated longterm relationships with dominant Japanese importers and exporters, especially in the frozen seafood industry but also in other refrigerated commodity sectors such as meat, fruit and vegetables."

"When it comes to imports of frozen seafood, Japan has had long relationships with Norway, Iceland, the Faroe Islands and the Netherlands. Since Samskip is so strong in these markets, this agreement is very important for Interocean."

"Besides focusing on forwarding reefer containers ex Europe to the Far East and Japan, this agreement also creates opportunities for intra-Asian business. Once produce is processed at fish factories in Asia and is ready for dispatch, Interocean Shipping Corporation will co-ordinate the transport with Samskip Reefer Logistics for final delivery inside Asia or for export to Europe or the US."

Samskip now controls coldstores in IJmuiden and Rotterdam in the Netherlands, Ålesund in Norway, Kollafjørður in the Faroe Islands and Reykjavík in Iceland as well as in Bayside in Canada.

This news is a total 1917 time has been read