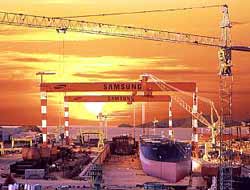 Samsung boasts 6 billion dollars worth of orders in shortest time

Samsung press release: Samsung Heavy Industries (SHI) announced on April 25 that it received an order to build five container ships from a Hong Kong customer. This means that the shipbuilder has received USD 6 billion worth of orders so far this year, the shortest period of time in which any company in the world shipbuilding industry has surpassed the USD 6 billion mark. This also means that, as of April 25th, SHI has already reached 50% of its total order target for 2007.

Specifically, SHI has received orders worth USD 6.2 billion so far in 2007, which is USD 2.5 billion (68%) higher than the USD 3.7 billion recorded in the same period of last year. Total backlog orders have reached USD 29 billion, which means that it has already secured orders to be finished and delivered by 2010.

Many marine market research firms, including Clarkson, had projected a reduction of ship orders this year across the world, and in light of this projection SHI had adjusted its target orders downwards, to USD 11 billion from USD 12.6 billion, its results in the previous year.

Despite such unfavourable prospects, SHI still managed increase orders compared with the previous year. SHI’s situation appears to have been helped by the following reasons. Firstly, ship demand has increased thanks to an increase in marine trading volume in emerging markets, including China and India, and the robust development of smallㅡscale oil fields.

Second, the demand of sea facilities for energy development in the Arctic region and the North Sea has increased. Third, SHI emerged as a market leader, thanks to its top design capabilities and research manpower.
SHI has received orders for six LNG ships so far, while selectively receiving orders for FSPO and highㅡend sea platforms, enabling a record performance in the world shipbuilding industry through the receipt of orders for ships valued at USD 190 million each, and accounting for 84% of the global high valueㅡadded ships. SHIs performance is indeed unprecedented, both in terms of quality and quantity.

The story goes on. SHI received orders for all of the only three drill ships that were made in the world in 2007. It also secured 11 ships, or 80% of the total ship orders in the world. The shipbuilder also has 42 LNG ship orders received so far, at a cost of more than USD 200 million per ship.

Meanwhile, SHI plans to spend USD 260 million to build two production plants in China, and invest USD 600 million in expanding the inner wall of the Geoje shipyard and refining its production site. It will invest USD 150 million in R&D for automated robots and to make inroads into extreme weather markets. In total, it will spend USD 1 billion this year.

In addition, SHI has hired more than 700 new employees annually for each of the past five years. Utilizing these new employees, SHI plans to build 70 ships by 2010, although at current manpower levels, it only has the ability to build 50 ships.

CEO Kim Jingㅡwan said, “We are aggressively developing DㅡFPSO, which equips FPSO/FSRU LNG with drilling capability. We will be making inroads into the markets in Russia and West Africa by developing ships with increased operating efficiency that use fuel economically.”

This news is a total 2242 time has been read