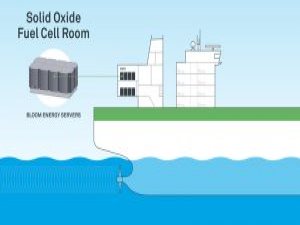 As informed, SHI aims to be the first shipbuilder to deliver a large cargo ship for ocean operation powered by fuel cells running on natural gas.

Such an innovation will play a key role in helping the company exceed the 50 percent emissions reduction target, compared to 2008 levels, that the International Maritime Organization (IMO) has mandated all shipbuilders should achieve by 2050.

The two companies have already taken a first step towards commercializing the maritime use of fuel cells for propulsion and auxiliary power. At a ceremony at the Geoje shipyard, SHI announced they have received approval in principle from classification society DNV GL, in collaboration with Bloom Energy to proceed with a fuel cell-powered ship design for Aframax crude oil tankers (COTs).

“This innovative design is one of the ways to improve GHG emissions, to further make LNG a solid and long-term solution.”

Today, 80 percent of the world’s shipping fleet runs on heavy fuel oil, or bunker fuel. The combustion of this fuel to provide propulsion and auxiliary power to ships causes the marine transport industry to produce between 2% and 3% of global carbon emissions.

Replacing combustion-based power generation from bunker oil with electrochemical conversion of LNG through fuel cells could have a profound impact on carbon emissions from marine transportation. Bloom Energy and SHI estimate that replacing oil-based power generation on large cargo ships, which require up to 100 megawatts of power per ship, could reduce annual greenhouse gas emissions from shipping by 45 percent.

“Bringing the Bloom Energy Server’s transformative clean technology to the shipping industry provides us with a tremendously exciting opportunity to accelerate the decarbonization of another vital sector of the global economy,” KR Sridhar, founder, chairman and CEO of Bloom Energy, pointed out.

Bloom Energy Servers use natural gas, biogas or hydrogen as fuel. The two companies envision onboard fuel cells being powered by natural gas, converted from LNG.

According to the manufacturer of clean-energy fuel cells, the modularity of Bloom Energy Servers makes them well suited to the space constraints of ships. Unlike large, multi-megawatt generating combustion engines, the servers can be deployed in increments as small as 200 kilowatts, enabling power sources to be distributed throughout a ship to optimize space utilization. SHI envisions Bloom Energy Servers displacing existing power generation sets, and therefore requiring no additional space, or even reducing the total space required for power generation.

The servers technology has been approved by DNV GL to be deployed aboard ships with minor modifications to suit ship installation and use in an enclosed environment.

Moreover, Bloom Energy recently announced the capability of its fuel cells to run on hydrogen. As nations and ports develop their hydrogen infrastructure, fuel cell-powered ships could transition from natural gas fuel to hydrogen fuel and become zero-carbon and zero-smog emitters.