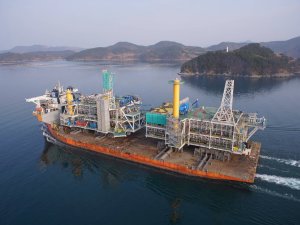 "SHI successfuly completed the North Sea bound offshore platform within the scheduled delivery date in the original contract," said a statement from the company. SHI revealed that one of the two offshore platform topside modules, worth KRW 1.18 trillion together, left its Geoje shipyard.

SHI-built Johan Sverdrup topsides are for a 26,000-ton process platform and a 23,000-ton riser platform.

The newly left topside is for the riser platform. It will arrive in Norway after about six weeks to be integrated on top of the already installed jacket. The process platform is to leave Geoje in December 2018.

The riser platform is for Johan Sverdrup field located 140km west to the shore near Stavanger. The gigantic field has an estimated reserves of 2.1~3.0 billion barrels of oil.

SHI explains that this project is a clear example of successful application of the 'Samsung Lessons Learned System.' A Samsung representative said "we allocated large number of workers with previous Statoil project experience to minimize known risks which resulted in the quickest completion of platform of the size."

The Samsung representative said "we expect to strengthen competitive edge even more in North Sea region where new project sanctions are coming thanks to this latest success in completion of the offshore platform construction."