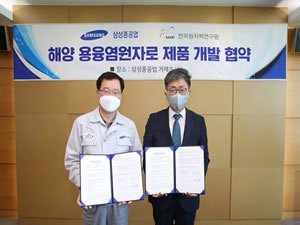 To make this happen, the company has signed a joint hand with Korea’s only comprehensive nuclear research and development institute, Korea Atomic Energy Research Institute (KAERI).

The company has contracted a Molten-Salt reactor (MSR) pact with the KAERI.

Through this joint venture, SHI plans to forge the MSR-based floating nuclear power plant and nuclear-based maritime market to reinforce its capacity for future-based business expansion. Briefing about the MSR technology it is not very much different from the existing PWR reactors, the concept being the same steam produced by the monitored fission powers the turbine to produce electricity.

The main difference between the MSR and PWR is the fact that salt here is used as a coolant instead of using water for the same purpose.

Also, there is very little need of employing fuel rods as the nuclear fuel can be dissolved in the coolant itself.

The data from the International Atomic Energy Agency (IAEA), shows the fact that there has been plenty of research on the MSR technology but the practical deployments of the same concept have remained under the veil.

The primary reason for that is the fact that there is a lack of MSR license standards and supply chain irregularities.

But in the previous years, several nations like the US, Canada, and China have started looking up to this MSR technology.

Jintaek Jeong, president of Samsung Heavy Industries said that the MSR being a carbon-free energy source meets the ambition of the SHI which aims to focus on Research and development to become a future growth engine.

The use of the cycle of the nuclear fuel for the MSR is also more than 20 years thus less chance of replacements.