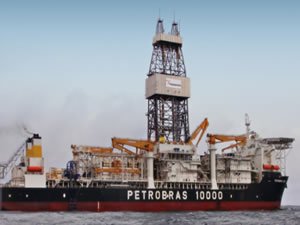 Samsung Heavy Industries has agreed to settle allegations of corruption in connection with the sprawling Petrobras bribery investigation, paying a fine of $150 million in an agreement with Brazilian prosecutors.

The allegations centered on an order for three drillships that Petrobras placed with SHI in 2006-2007. When Brazilian prosecutors began digging into the so-called "Lava Jato" bribery and money-laundering scheme at Petrobras in 2014, they found evidence that a shipbroker for the drillship deal had used a portion of his commission from Samsung in order to pay millions of dollars in bribes to senior Petrobras officials.

“The company has accepted and agreed to results of Brazilian authorities’ investigation to resolve management uncertainties, which may arise from litigation processes, if they last long," SHI said in a regulatory filing.

About $130 million of the total amount will be paid to Petrobras as damages, with the balance going to the Brazilian government.

SHI had already settled related U.S. charges and litigation stemming from the order for the drillship DS-5, one of the three transactions in question. In a 2019 plea agreement with U.S. federal prosecutors, the company admitted to paying about $20 million in commission payments to a Brazilian intermediary, knowing that portions of the money would be paid as bribes to Petrobras officials. It paid a $75 million fine to the U.S. Department of Justice to settle the case, and DOJ agreed to transfer half ($37.5 million) to the government of Brazil.

The newly-announced settlement with Brazil comes as SHI is gearing up to compete for a multi-billion-dollar contract to build two FPSOs for Petrobras - the first new production platform tender the Brazilian company has floated in seven years. SHI submitted the highest bid, exceeding the price offered by Singaporean competitor Keppel by roughly $500 million, according to BNAmericas.

As for the controversial drillships at the center of the scandal, only one - the Petrobras 10000 - is still in oil and gas service. DS-5 was broken up in 2020, and Vittoria 10000 was acquired by Allseas in 2019 for a conversion project.

This news is a total 5836 time has been read
Tags: Petrobras , SAMSUNG HEAVY INDUSTRIES , BRIBERY CASE FOR $150M , Brazilian authorities