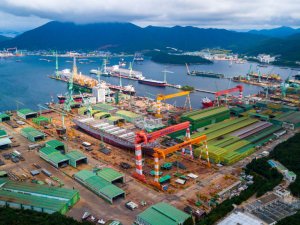 Samsung Heavy Industries Co. plunged the most on record in Seoul trading after forecasting surprise losses and announcing a share sale plan, underscoring the bleak outlook for the global shipbuilding industry.

The world’s third-largest shipbuilder said Wednesday it plans to raise 1.5 trillion won ($1.4 billion) by selling new shares in a rights offering. Samsung Heavy, saddled with 3.3 trillion won of short-term debt, expects demand for new vessels and offshore projects to continue shrinking and that will push the company into losses this year and next, compared with analyst estimates for a profit.

“Things are really getting bad for Samsung Heavy because they have been slow to respond to the weakening market conditions,” said Park Moo Hyun, an analyst at Hana Financial Investment Co. in Seoul. “It’s not going to look good for the company next year.”

Shipyards from South Korea to Singapore have been struggling to emerge from losses since the global financial crisis amid excess capacity worldwide and a plunge in oil prices that damped demand for vessels and offshore drilling rigs. Last year was the worst for the industry, with the collapse of Hanjin Shipping Co., previously among the world’s largest container lines, and freight rates tumbling to record lows.

“Falling demand for orders, expected losses from some contracts won this year and higher raw material costs have led the company to forecast losses for this year and next,” Samsung Heavy said in a statement Wednesday. “We expect the situation to improve in 2019.”

Korea Development Bank is monitoring the situation closely and creditors have been regularly reviewing the company’s restructuring efforts, said a spokesman for the state-owned bank, Samsung Heavy’s main creditor. A spokeswoman at Samsung Electronics Co., the shipyard’s biggest shareholder, said no decision has been made on the rights offering.

As of Sept. 30, Samsung Heavy had 3.3 trillion won of debt maturing within a year, compared with 451 billion won of cash and equivalents, according to its financial report. The company, rated BBB+ by Korea Ratings, has sold 255 billion won of bonds this year via private placement, according to data from Korea Securities Depository.

“Samsung Heavy is trying to reduce liquidity risk by selling new shares,” said Choi Joong-ki, general manager of the corporate rating department at Nice Investors Service. “We’ll need to monitor whether Samsung will actually be able to sell shares as planned, given there’s uncertainty in terms of timing and size.” The South Korean rating company has an A- rating on Samsung Heavy.

Samsung Electronics is Samsung Heavy’s largest shareholder, with a 16.9 percent stake as of Sept. 30, according to the shipbuilder’s filing. Other major shareholders include Samsung Life Insurance Co. with 3.2 percent and Samsung Electro-Mechanics Co. with 2.3 percent.

The share sale is the second in as many years for Samsung Heavy, which raised 1.1 trillion won in 2016. The company, which reported losses in the past two years, said Wednesday it expects to complete the latest sale by May.

Shrinking orders for new vessels amid mounting losses have heightened concerns that all three Korean shipbuilders’ finances could be hurt further.

Among reform measures, South Korean yards eliminated at least 20,000 jobs last year. Daewoo Shipbuilding, which last posted a full-year operating profit in 2011, was bailed out by creditors twice in the past two years.

Samsung Heavy, established in 1974, built its first dock in 1979 in Geoje, south of Seoul, and grew through acquisitions of smaller yards and demand in the industry. The company is the world’s biggest builder of drill ships and liquefied natural gas carriers.

The company is building floating LNG production plants for Royal Dutch Shell Plc. The first unit, the biggest of its kind, sailed to Australia from Samsung Heavy’s shipyard in June.