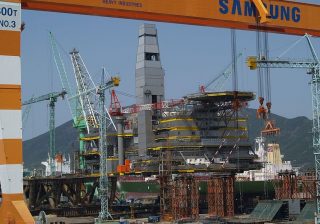 SHI has been selected as a technological partner that would assist Zvezda in building the vessels.

Under the deal signed in Vladivostok on September 4, SHI would design ships that use LNG as a primary fuel. The LNG carriers will feature 45 MW of power capacity, comparable to that of a nuclear icebreaker, and safely carry LNG while breaking ice up to 2.1 meters thick in minus 52 degrees Celsius, according to SHI.

“As we expand icebreaking technology into LNG carriers, we will be able to establish a solid foothold in the Arctic ships market,” an official of SHI said.

What is more, SHI confirmed it would form a joint venture with Zvezda the aim of assisting Zvezda in constructing shuttle tankers.

Samsung Heavy has reportedly secured 60 out of 138 orders for shuttle tankers place to date, accounting for 43 percent of global market share.