Sanctions-busting tankers set for the scrapheap 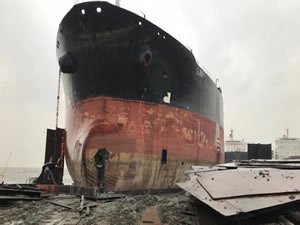 Vintage ships moving sanctioned oil cargoes could head to be broken up as the Biden administration in the US looks at sanctions relief for both Iran and Venezuela.

At present tanker brokers Gibson suspect up to 10% and 6% of the VLCC and Suezmax fleets respectively are involved in such activity.

The actual number is likely to be higher with some vessels recently sold yet to sail from the delivery location, whilst other vessels are yet to perform illicit activity, but look likely to do so.

“Demand in these illicit trades is finite, and eventually the market will become saturated,” Gibson predicted in its latest weekly report, going on to point out that rising demo prices have put scrap prices above 20-year-old secondhand values, making it increasingly attractive to sell into the demolition market.

Additionally, with China introducing a tax on bitumen mix imports from June 12, the incentive to import sanctioned crudes described as bitumen mix may soon be eroded.

“Sales into these illicit trades are expected to slow down, whilst any sanctions relief will erode the premium rates paid for such activity,” Gibson projected, adding:

“However, the fact that such a large portion of the crude tanker fleet is now effectively untradeable bodes well for the future.

These vessels are unlikely to ever return to compete in the regular market, and when production rises and if sanctions are removed, the international fleet will be the main beneficiary.”

This news is a total 411 time has been read
Tags: Gibson , Suezmax , Sanctions , busting tankers set for the scrapheap , IRAN , maritime news