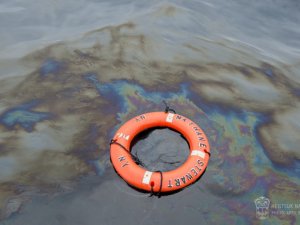 A barge carrying sand and gravel has reportedly flipped over and sank in British Columbia’s Inside Passage near Bella Bella, marking the second major marine accident in the area in less than a month.

Bella Bella’s Heiltsuk First Nation reports that incident occurred Sunday at about 7 p.m. in the area of Graham Reach (Swanson Bay), to the north of Bella Bella, during heavy weather. The barge was being towed by the 37-meter tug Columbia Layne, owned by Channel Construction  of Juneau, Alaska, when incident occurred.

The incident was confirmed by a spokesman with the Joint Rescue Coordination Centre, who was able to that an American-registered tug was towing the barge from Seattle to Juneau when the cargo shifted, causing the barge to flip.

All four crew members aboard the tug, which at some point was able to disconnect from the barge, are reported safe. The barge has since sunk.

The incident comes less than a month after the American tug Nathan E. Stewart, owned Houston-based Kirby Corp., ran aground and sank near Bella Bella on October 13, releasing an unknown amount of diesel fuel into the environment. Oil spill cleanup and salvage is still on-going at the site.

The Heiltsuk Nation says the two incidents underscore the need to improve marine safety and oil spill response in the region. The Heiltsuk has already been calling for an all-out oil tanker moratorium along British Colombia’s northern coast, which could be implemented as soon as later this year.

This news is a total 2805 time has been read
Tags: Sand Barge Sinks in B.C.’s Inside Passage Highlighting Marine Safety Concerns