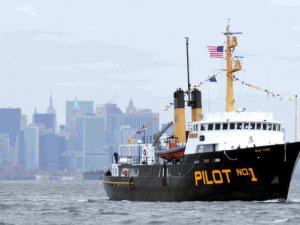 A veteran Sandy Hook ship pilot has died after falling during a boarding of an inbound containership at the Port of New York and New Jersey on Monday morning.

The U.S. Coast Guard said it responded with units from the New York Fire Department and New York Police Department Harbor Police after the pilot fell while boarding the U.S.-flagged Maersk Kensington at 4:30 a.m.

The pilot was transported to a hospital on Staten Island by a Sandy Hook pilot boat, but eventually succumbed to injuries received in the fall, the Coast Guard said.

The U.S. Coast Guard has launched an investigation into the circumstances surrounding the fall.

The Sandy Hook Pilots Association operates two “Ambrose class” station boats, the PB New York, which is used as the winter boat, and the PB New Jersey, utilized during the summer, as well as four smaller “America class” boats, which are used for pilot boardings and transporting pilots to and from the pilot station. It also has one larger boat, named Sandy Hook.

The Coast Guard did not specify which boat was involved in the accident.

The MV Maersk Kensington was arriving from Algeciras, Spain when the incident occurred, according to AIS data.

Around the time of the accident, the National Data Buoy Center’s New York Harbor Approach “Ambrose Light” buoy (Station 44065) was reporting significant wave heights in excess of 4 to 5-feet, with winds gusts up to 30 knots.

The Sandy Hook Pilots Association statement is posted in full below:

On December 30, 2019 at approximately 0430, Sandy Hook Pilot Captain Dennis R. Sherwood was involved in an incident while boarding a container vessel inbound to the Port of New York & New Jersey. He sustained injuries after falling from an accommodation ladder and was evacuated to a local hospital where his injuries proved to be fatal. Prior to the incident, Captain Sherwood had been piloting vessels in and out of the Port of New York & New Jersey for over 35 years. The incident is being investigated by the United States Coast Guard. Captain Sherwood is survived by his wife Marianne Sherwood, daughter Kelly Sherwood (son-in-law Robert McBriar), son Dennis Sherwood (son-in-law Paul Caruso), son William Sherwood and daughter Alexis Sherwood.

This news is a total 348 time has been read
Tags: Sandy Hook ship pilot, Port of New York and New Jersey