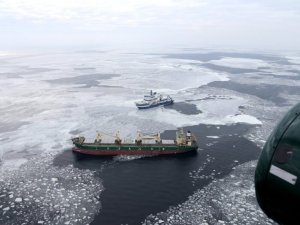 Maritime authorities in Finland are responding to a bulk carrier that has taken on water in its engine room in the Gulf of Finland.

The leak was reported at 1241 local time on Thursday (March 8) as the ship was sailing in international waters from St Petersburg, according to the Finnish Border Guard, which is coordinating the response. The water ingress was reportedly coming from the bilge well.

The Border Guard has reported that the water ingress has been brought under control but pumping continues. At one point the water in the engine room reached a depth of 5 meters. Water has also spread to other compartments.

All 22 crew members remain on board the vessel.

SAR assets have arrived at the area, including the Border Guard’s patrol vessel Tursas, Arctia Oy’s multipurpose icebreaker Nordica, Alfons Håkans’ Atlas, and Kindral Kurvits, an Estonian patrol vessel. The Finnish Navy’s pollution control vessel Halli is on its way expected to arrive Saturday morning. In addition, the Border Guard has two helicopters on standby to evacuate crew if necessary.

The Border Guard reports that the vessel is not in danger of sinking and there is no immediate danger to crew members on board. Pumping will continue until the ship is taken under tow, it said.

The ship drifted slightly to the west in the first day, the Border Guard said.

This news is a total 958 time has been read
Tags: SAR Operation Underway as Bulk Carrier Takes on Water in Gulf of Finland