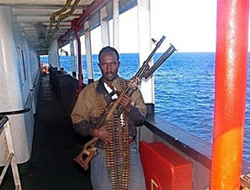 The crew of a luxury French yacht held by pirates near Somalia have been freed "without incident", French President Nicolas Sarkozy has said.

The crew of a luxury French yacht held by pirates near Somalia have been freed "without incident", French President Nicolas Sarkozy has said.

He thanked the French military for their role in freeing the 30 hostages on board The Ponant which was taken in the Gulf of Aden last Friday.

The 850-tonne, three-masted yacht was sailing back to the Mediterranean from the Seychelles when it was seized.

Somali coastal waters are known to be among the most hazardous in the world. More than 25 ships were seized by pirates there in 2007.

"The president expresses his deep gratitude to the French armed forces and all the state services which enabled a rapid and peaceful solution to this hostage-taking," Sarkozy's statement said, without giving further details.

France has troops in nearby Djibouti and also participates in a multinational naval force that patrols this part of the Indian Ocean.

The threat from pirates prompted France to order its navy, in November last year, to escort two ships carrying food aid to Somalia.

In November 2005, pirates attempted to board a cruise ship carrying 600 passengers off the Somali coast. Somalia has not had an effective central government for more than 17 years and is plagued by insecurity.

This news is a total 617 time has been read