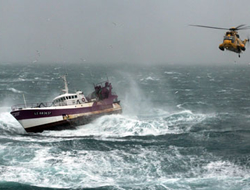 The search for the schooner, Niña, missing in the Tasman Sea, is breaking new ground in the use of satellite images to locate mariners.

The Nina that was carrying  David Dyche, an American mariner who works for Edison Chouest Offshore, his wife, their teenage son, Wright  and a crew of three others  from New Zealand to Australia when she was last heard from early this summer.

On June 4th, 2013, Professor Evi Nemeth, crewing on the Niña, failed to check in for a 6:00 pm. Satellite telephone communication to New Zealand weatherman Bob McDavitt. Professor Nemeth sent an earlier text indicating the Niña’s sails had been shredded. At the request of the families, the Rescue Coordination center New Zealand commenced a communication search for the crew of the Niña.

Because the RCC-NZ was unable to find the Niña, some say the boat sank. However, the families, believe the Niña is still afloat and doubt the ability of the side-looking radar systems on board the New Zealand P-3k Orion search aircraft to locate a wooden boat lying low in the water.  The RCC-NZ admits radar searches are useless to detect life rafts.

After the search was suspended on July 5th, 2013, Ricky Wright, father of missing crew member Danielle Wright, asked Texas Equusearch (TES) to advise the relatives how best to conduct a private search. TES is an all volunteer organization which assists law enforcement and U.S. federal agencies in the search for missing people. TES assembled a dream team of SAR experts, including fluid hydrologists, geophysicists and NASA scientists, again, all volunteers. Digital Globe, a satellite services provider in Longmont, Colorado was also contacted and tasked their Worldview I and II and their Quickbird satellites to take images over the Tasman Sea.

Under crowd sourcing theory, when many untrained observers pick the same target, they are usually as accurate as an expert. Over 13,000 people signed up to review the Tasman Sea images, though not all are active. According to the TES satellite coordinator, Larry Slack, the volunteer researchers have reviewed 3,248,584 individual maps so far.

“In today’s technological advanced world, governments and private companies have a fleet of commercial satellites circling the globe with high-resolution cameras, which can be positioned to almost any location,” Slack noted. “Depending upon the current orbit of an available satellite it can be re-positioned and re-tasked to capture the image areas in a matter of a few hours.”

While TES is using satellites to help locate the Niña, now missing for nearly 6 months, Slack says satellites could be used as a first responder tool in addition to traditional search methods.

“A search 20 x 100 miles would take 6-8 hours for a traditional aerial over flight; whereas, multiple satellites could take photos of a large area without deploying aircraft,” Slack said.

Satellites are not subject to the dangerous swell after a storm that presents hazards to rescue craft, though satellites are affected by cloud cover. Photographs can be studied over time, which gives first responders a fast second look, unlike a visual search which is rarely digitally captured. Satellite images record everything, while radar searches may not pick up rafts or non-metallic objects. In the case of the Niña, it is unknown whether the radar search was recorded at all.

Some skeptical sailors have questioned the benefit of a search this long after the Niña disappeared. The families respond by saying no evidence has ever been found the Niña sank. They say most of the crew are experienced mariners and Captain Dyche is  a professional mariner working for the firm Edison Chouset Offshore.

The family is sure the sailors are doing everything they can to save themselves, including to jury rig a sail. However, the Niña is heavy and the make-shift rig would need to provide adequate lift to overcome the vicious reverse circulating currents of the Tasman Sea. Even then, a jury rigged sail is subject to the same fate that befell the original sail and supporting structures.

Other mariners have questioned the communications blackout. The Niña had no power generating source except for it’s high output, engine run, alternator, according to a note on the David Dyche page. If the crew ran out of fuel they would be unable to charge batteries or otherwise communicate. Even if the Niña had a generator, all of the electronics could easily have been destroyed by a lightning strike. The Spot Tracking device stopped transmitting two days prior to the last message sent by Professor Nemeth.

“It is our belief that the Niña continued on course 310 degrees with no sails. They ran out of fuel and are floating in the reverse currents of the Tasman Sea,” Slack indicated.

“John Glennie capsized in the trimaran Rose Noelle and survived 119 days at sea off the East coast of New Zealand,” Baird said. “What sailors need to survive is shelter, water and food. If the Niña is afloat, it provides better shelter than John and his crew had. There is a lot of rain in the Tasman Sea right now. The boat creates a sort of floating reef so the crew can fish.”

The families, Texas EquuSearch, and thousands of volunteers would not continue this extremely costly and exhausting search if we didn’t believe the Niña was afloat,” Slack said, and then added, “the entire cost of the private search, mostly for satellite images, search aircraft and drift modeling, has been donated by Digital Globe, by the families and by concerned people.”

The Tasman Sea is famous for trapping boats and sailors for up to a year before spitting them out on Australian and New Zealand beaches. Long term survivability at sea is feasible. If New Zealand missed the boat in their search, the sailors are floating and in desperate need of rescue. The satellite search will help identify possible Niña targets.

“A floating sailing vessel, which we strongly believe is the Niña, was captured by satellite on September 16, local New Zealand. The image was available to our reviewers on September 20th, who within hours brought this image to the attention of the review team. On September 21, at our request, John Funnell from New Zealand presented this image to New Zealand RCC, asking for help on our behalf,” Slack said.

Meanwhile, weatherman, Bob McDavitt reviewed the image and said it could not be ruled out as the Niña. Unfortunately, in a cordial letter expressing regret, the RCC-NZ responded to the request to resume the search, saying, “The resolution of the images is insufficient to draw an unequivocal determination of the identified feature but, after exhaustive analysis, it is considered very unlikely that the object is the SV Niña.”

“We have asked the National Geo-spatial Intelligence Agency to help us with images,” Baird said. “That request is supported by a written request by a senator representing one of the family members.”The NGA controls satellites which may have better resolution than commercial grade satellites. Baird says he believes the NGA can take more accurate photographs and analyze them faster.

“Imagine being responsible for a search area nearly 100 times larger than your country. New Zealand is a common sense and rightfully proud country with strong maritime traditions. We saw that when the whole country supported the Kiwi bid for the America’s Cup,” Baird said. “But New Zealand only has 4 million people who pay the bill for search and rescue of any boat, no matter where it is from, which gets lost in the New Zealand area of responsibility. The NGA could provide another tool to New Zealand, and it would be less expensive and less intrusive than sending the U.S. Navy to search,” Baird continued.

Satellite images aside, TES says one easy improvement in search and rescue technique is to use resources already deployed in the area of concern. In the Niña case, the U.S. Navy conducted unrelated exercises near the search area but refused to cooperate with TES. Another improvement that can be made is the forging of public-private partnerships like the one TES has established with U.S. law enforcement. Normally, TES provides significant cost savings to governments by marshaling labor and high technology, all operating under the direction of the respective agencies. TES would like to assist the RCC-NZ, perhaps by helping fund the fuel costs of a new Orion search and by supporting a request by the RCC-NZ for NGA satellite images.

Whether or not the NGA assists in the Niña search, the use of satellite technology is a useful tool which may save the lives of future mariners, Slack says. He said while Digital Globe can take higher resolution photos, U.S. Citizens are limited to 50 cm images for national security reasons. Meanwhile, French and Chinese satellite companies have access to higher resolution photos. Slack is optimistic the US policy will change soon which will help Digital Globe remain competitive.

“It reduces the risk to flight crews, as well,” Slack noted. “Search crews will still have to fly, but the general location of a distressed or overdue craft will be known.” Both Baird and Slack agree, the key to the use of satellites is obtaining the highest resolution images possible, with fast analysis, combined with an immediate response on the part of search and rescue teams. As the price of high technology drops, the cost savings over the use of conventional aircraft could be enormous, especially when searching the huge area under consideration for the Niña.

“About the only drawback I see is, a satellite can’t wave its wings at the crew to let them know help is on the way, or drop emergency supplies, like an airplane can,” Baird said. “We have aircraft standing by for that purpose, though.”

In order for satellites to be used more commonly, countries that have them must be willing to share information with countries that don’t. It is the mutual cooperation that makes the RCC system strong world-wide.

“A related application of satellite technology is the use of satellite based, vs. VHF based, AIS systems for safety, for both commercial and pleasure craft,” Baird added.

John Glennie of the Rose Noelle said in a letter to the RCC-NZ, “I know we could have been out there another 6 months on an upside down Rose-Noelle, (so then) an upright Niña will have no worries. The Niña is a big boat and they will have all their gear aboard in which to catch fish and live quite comfortably. Their skipper is knowledgeable and experienced. “ Glennie continued. “You will never know Greatness without Adversity, but I think it’s about time for a little help.”

“The question is not whether they are going to find the Niña,”Baird said. “Several boats like the Scotch Bonnet and the Air Apparent were abandoned in the Tasman Sea but eventually drifted to shore. The only question is, will the U.S. and New Zealand work together to develop this technology, and save the Niña 7, or will these sailors be rescued by private efforts?”

This news is a total 1502 time has been read