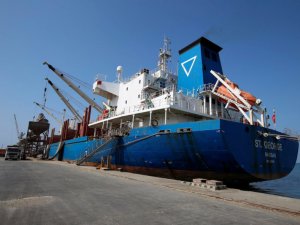 As part of the plan, the two coalition states aim to establish a shipping lane to Hodeidah from the UAE capital, Abu Dhabi, and Jizan, a city in southern Saudi Arabia, officials told a news conference in Riyadh.

“We have several ships stationed, and we have storage capacity very close to Hodeidah fully stocked up,” Reem al-Hashimy, the UAE minister of state for international cooperation, told Reuters in Riyadh.

“We have as well planes that are out of the UAE that are ready to be flown in once the situation allows for that,” she said.

The plan will be carried out by Saudi Arabia’s King Salman Humanitarian Aid and Relief Center and the UAE Red Crescent, with Hashimy later telling reporters the UAE would use its military base in Eritrea for transporting aid.

The assault marks the first time the Arab states have tried to capture a heavily defended major city since joining the war three years ago against the Iran-aligned Houthis, who control Yemen’s most populated areas, including the capital, Sanaa.

The operation, which began after a three-day deadline set by the UAE for the Houthis to quit the port, comes at the risk of worsening the world’s biggest humanitarian crisis.

Coalition states say they will try to keep the port running and can ease the crisis once they seize it by lifting import restrictions they have imposed.

But they accused the Houthis of planting mines that could prolong that effort, they added.

“If the Houthis don’t damage the port by mining it, you have all the assurances that the coalition forces will not damage the port,” the UAE’s ambassador to the UK, Sulaiman al-Mazroui, told Abu Dhabi-linked newspaper The National.

“The information we have is that some of this infrastructure has been mined,” he added.

Hashimy said the UAE was readying replacement cranes that could be provided if physical infrastructure in the port is damaged.

Coalition forces have already begun to disarm mines planted by the Houthis on their route into Hodeidah, Malki told Ekhbariyah.

This news is a total 951 time has been read
Tags: Saudi Arabia and UAE Announce Plan to Protect Shipping Lane to Yemen’s Hodeidah Port