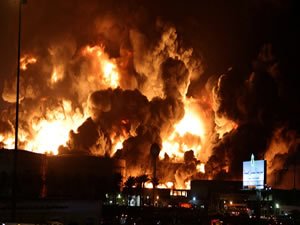 The Saudi-led coalition says the barrage of drone and missile attacks by the Yemeni rebel group did not cause any casualties.

The attacks early on Sunday did not cause casualties, the Saudi-led military coalition fighting in Yemen said, but damaged civilian vehicles and homes in the area.

Later on Sunday, the military coalition said an aerial attack struck an oil facility in the Saudi port city of Jeddah, sparking a fire.

The coalition said that firefighters were dealing with a “limited” fire that erupted in one of the tanks at a petroleum distribution centre. It said the fire at the Saudi Arabian Oil Co.

The conflict has caused a humanitarian crisis in Yemen. Yehia Sarie, a spokesman for Iran-backed Houthi rebels, said the group had launched “a wide and large military operation into the depth of Saudi Arabia”, without immediately elaborating.

The military coalition said it thwarted an attack on an LNG plant at a petrochemicals complex in the Red Sea port city of Yanbu run by the Saudi Arabian Oil Co, better known as Aramco.

It was not immediately clear if the attack had inflicted any damage on the plant.

The official Saudi Press Agency posted various photos of firetrucks dousing leaping flames with water hoses, as well as wrecked cars and craters in the ground allegedly left by the series of drone and ballistic missile attacks.

The Saudi-owned al-Hadath TV channel quoted the Saudi-led coalition later on Sunday as saying it destroyed a boat laden with explosives that belongs to the Iran-aligned group.

The destruction of the boat, off the Yemeni coastal city of Hodeidah, thwarted an imminent attack on shipping in the Red Sea, the TV channel said.

There was no immediate confirmation from the Houthis who control most of northern Yemen, including Hodeidah. The incident comes after the Saudi-based Gulf Cooperation Council invited Yemen’s warring sides for talks in Riyadh aimed at ending the nearly eight-year war.

The Houthis have said they would participate only in discussions held in a neutral country and the priority should be lifting a coalition blockade on areas held by the group.

Peace talks have floundered since the Houthis have tried to capture oil-rich Marib, one of the last remaining strongholds of the Saudi-backed Yemeni government in the country’s north.

Saudi Arabia is leading a military coalition in Yemen in support of the internationally recognised government, which has been engaged in a bloody conflict against the Houthis since 2015.