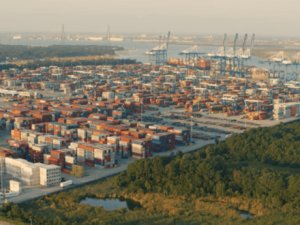 South Carolina Ports Authority has seen strong volumes in the first four months of fiscal year 2020 with growth in both containerized and vehicle cargo.

As measured by the total number of boxes handled, SCPA moved 122,591 pier containers in October for a total of 484,549 pier containers in fiscal 2020, up nearly 7% from a year ago.S.C. Ports handled 20,986 vehicles at Columbus Street Terminal in October. SCPA has seen a 36% uptick in vehicles coming through the Port with 79,238 vehicles moved thus far in fiscal year 2020.

Breakbulk cargo was also strong in October with 61,305 pier tons handled; breakbulk cargo is up 43% for the fiscal year with 247,111 pier tons handled since July.“We have seen strong volumes in early fiscal year 2020 with growth across multiple business segments,” S.C. Ports Authority President and CEO Jim Newsome said. “While we face some uncertainty in the global market, we are working to further grow and diversify our cargo base to ensure continued success.”

Inland Port Dillon, which opened last year in the Pee Dee region of South Carolina along Interstate 95, handled 2,484 rail moves in October for a total of 11,151 rail moves since July.

“Southeast ports continue to outperform other U.S. ports, which is a trend we anticipate continuing as S.C. Ports offers customers reliability, efficiently run terminals and the best workforce in the business,” Newsome said. “Our ongoing infrastructure projects, such as the opening of the Hugh K. Leatherman Sr. Terminal in North Charleston in 2021, will ensure we have ample capacity to meet our customers’ future needs as well.” DP World Announces Agreements in Israel Under New Peace DealDP World and Dubai Customs signed a series of memorandums of understanding (MoUs) with an Israeli company called DoverTower, which has broad investments, including co-ownership of Israel Shipyards in Haifa and the Port of Eilat located on the Red Sea.