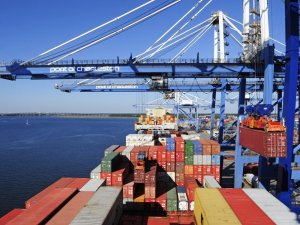 Despite global trade tensions, the South Carolina Ports Authority (SCPA) had the best calendar year in its history, handling 2.44 million TEUs in 2019, a 5% increase year-over-year.

As informed, S.C. Ports handled 1.38 million pier containers — as measured by the total number of boxes handled — at the Wando Welch and North Charleston terminals in 2019.

Of those, more than 1.1 million containers went across the docks of the Wando terminal whilst major renovations were ongoing to enhance the terminal’s big-ship readiness capabilities.

“We enter 2020 with a great decade of growth behind us, during which we doubled our volumes, tripled our asset base and added more than 200 people to our team,” Jim Newsome, S.C. Ports Authority President and CEO, commented.

In December 2019, S.C. Ports handled 187,882 TEUs at the Wando Welch and North Charleston container terminals. This brings the total TEUs handled thus far in fiscal year 2020, from July through December, to 1.23 million, up nearly 4% year-over-year.

“Our ongoing growth supports our long-planned, vital infrastructure projects, which are close to becoming a reality,” Newsome pointed out.

“In 2021, S.C. Ports will open the first phase of the Hugh K. Leatherman Sr. Terminal and achieve a 52-foot depth in Charleston Harbor.”

SCPA owns and operates public seaport and intermodal facilities in Charleston, Dillon, Georgetown and Greer. The port authority is soon to be home to the deepest harbor on the U.S. East Coast at 52 feet.

This news is a total 540 time has been read
Tags: SCPA, South Carolina Ports Authority, Throughput