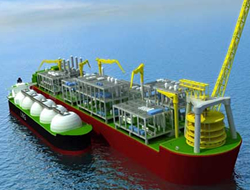 Another Australian floating LNG platform has been given the go-ahead with federal environment minister Greg Hunt signing off on the Scarborough gas project in early November.

Jointly owned by ExxonMobil (through affiliate Esson Australia) and BHP Billiton, the project will involve the construction and deployment of a 495-metre FLNG vessel – several metres longer than the FLNG platform ‘Prelude’ currently under construction in South Korea. Built by Samsung Heavy Industries for Royal Dutch Shell’s Browse Basin, ‘Prelude’ is itself set to become the largest floating structure ever made.

For companies such as ExxonMobil and Woodside, FLNG technology is favoured for its lower overheads, reduced workforce requirements and potentially greater profit margins for otherwise challenging site developments.

According to ExxonMobil's application for the approval, a final investment decision on Scarborough will be made in 2014-2015.

This news is a total 1460 time has been read