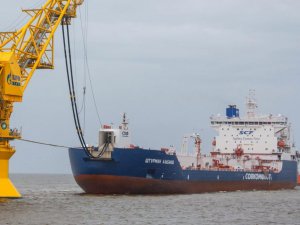 Russian shipping major Sovcomflot (SCF) revealed that its three Arctic shuttle tankers of the Shturman Albanov series have until now transported one million tons of crude oil from the Gulf of Ob, Kara Sea, to the port of Murmansk.

The millionth ton of crude oil produced at the Novy Port oil and gas condensate field was loaded on Shturman Albanov, the lead ship of the series, at the Arctic Gate marine terminal located near Cape Kamenny, Gulf of Ob, on January 29, 2017.

The first large cargo of oil was loaded on Shturman Albanov on September 12, 2016, and delivered to the port of Murmansk a few days later.

Sovcomflot’s three Arctic shuttle tankers including Shturman Albanov, Shturman Malygin and Shturman Ovtsyn are specially designed to carry crude oil from the Yamal Peninsula to the port of Murmansk all year-round. Featuring around 42,000 dwt, each of the three ships has a length of 249 meters and a width of 34 meters.

Built by South Korean shipbuilder Samsung Heavy Industries (SHI) in 2016, all three ships are under a long-term contract with Gazprom Neft.

The vessels fly the Russian flag and have Saint Petersburg as their home port.

This news is a total 855 time has been read
Tags: SCF’s Arctic Tankers Carry One Million Tons of Crude Oil