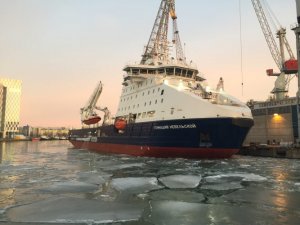 The 3,000 dwt Gennadiy Nevelskoy is the first of four vessels being built for SCF at Arctech.

“This vessel is technically a forerunner in arctic shipbuilding. It is also environmentally advanced and fulfills already the IMO Tier III requirements. We have also paid special attention to the underwater noise level caused by the ship,” Esko Mustamäki,CEO of Arctech Helsinki Shipyard, said.

Gennadiy Nevelskoy will have Saint Petersburg as her home port and will be registered under the Russian flag.

The four IBSVs will be used for the year-round delivery of supplies and consumables to offshore platforms, and for performing standby duty near them. In addition, the vessels will be outfitted for integrated environmental protection and rescue operations, according to Arctech.

This news is a total 1101 time has been read
Tags: SCF’s Ice-Breaking Platform Supply Vessel Named in Finland