Screw tug is expect to conclude 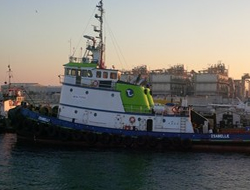 Marcon International, Inc. of Coupeville, Washington reported that the 5,570BHP tug Jabbar has been sold by Awal Marine Services of Manama, Kingdom of Bahrain to TradeWinds Towing LLC of Saint Augustine, Florida.

Iron Works of Houma, Louisiana as their Hull 335 for McAllister Towing & Transportation of New York. The twin screw tug was operated by International Tug Service, a joint venture company between McAllister and Arabian American Oil Co. Ltd. (Aramco) of Saudi Arabia in the major oil port of Ras Tanura prior to Aramco being purchased by the Saudi government in 1980. Jabbar was purchased by Awal Marine Services in 2001 and since that time regularly worked in the Arabian Gulf; Bombay High, India and offshore Croatia.

There are have been a few tugs that have always stood out and were considered as favorites by Marcon International for various reasons. Jabbar has been one of these few. When Marcon first started brokering tugs 32 years ago, we recognized that certain shipyards had reputations that followed their tugs and barges – both good and bad. When we marketed second-hand tugs for sale built by Main Iron Works we knew though that we were marketing a quality-built tug that would endure as long as owners and operators took the proper care of the vessel over the years. The name Main Iron Works as builder made our job easier, as it lent a certain cachet to the technical specifications in our marketing flyers. Jabbar is an example of both that quality construction and good care as evidenced by the first brief inspection reports e-mailed back to our office – “engine room in immaculate condition”, “steering flat in perfect condition”, “no knife edging on frames in ballast tanks” and “still long life…..”.

The tug, renamed isabelle, will operate under Vanuatu registry performing coastwise and ocean tows including project cargoes, marine salvage, rescue towage, and dredging & construction support within the Gulf of Mexico, Caribbean and Central & South America. isabelle is ready-to-work and Marcon is looking for tows from the Arabian Gulf towards North America, the U.S. Gulf Coast and all points in between – either east or westbound. TradeWinds earlier this year successfully completed a 5,233nm tow with one of their smaller tugs, also fixed through Marcon.

Marcon International has marketed Jabbar off and on when charter-free on a “private and confidential basis” since 2003 when we first brokered Awal Contracting’s two 95 – 100’ ABS-classed tugs “Martha” (ex-Martha Theriot) and “Justine” (ex-Toya Alario) to Trinidadian Buyers. Marcon also handled the purchase of the U.S. flag tugs “Miss Lis” (ex-Kari A, Marine Pioneer) and “Simone” (ex-Leslie Foss, Caribe Pioneer, Leslie Foss) for TradeWinds Towing LLC, acting as sole broker in all four transactions. Marcon has sold or chartered 13 tugs to-date this year totaling 49,523BHP and 294 tugs in the last 32 years totaling 915,795BHP. Sale of another U.S. flag, 3,000HP twin screw tug is expected to conclude within the week.

This news is a total 1509 time has been read