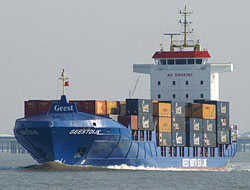 The Baltic Dry Index, a measure of shipping costs for commodities, fell the most since 1989 on concern that economic growth in the U.S. and China is slowing.

The Baltic Dry Index, a measure of shipping costs for commodities, fell the most since 1989 on concern that economic growth in the U.S. and China is slowing.

The index, which tracks transport costs on international trade routes, dropped 384 points, or 4.6 percent, to 7,949 points today, according to the London-based Baltic Exchange. Hire rates for every class of ship dropped.

''It could be that in 12 months' time, we look back and see this was the start'' of a recession, Andreas Vergottis, research director at Tufton Oceanic Ltd. in London, said by telephone today. The company's $1.2 billion hedge fund is the world's biggest dedicated to shipping.

China's trade surplus narrowed in December and money-supply growth dwindled, a sign the country's economic expansion may be slowing. The Asian nation's demand for coal and iron ore, used to make steel, pushed shipping rates to a record last year.

The Baltic Exchange's benchmark has dropped 28 percent from its Nov. 13 high of 11,039 points. Annual price talks between Chinese steelmakers and iron-ore producers including Cia. Vale do Rio Doce, the world's biggest, have stalled.

Rental rates have also weakened after Rio de Janeiro-based Vale said it halted iron ore exports from the port of Itaguai in Brazil because of repairs caused by a collision at the harbor.

''We've got a long way to go down,'' Vergottis said. ``The rates we have today are four times cost break-even and the market in the long term will go back to cost break-even.''

The price of hiring a capesize carrier, the biggest vessel within the benchmark, dropped to $124,451 a day today, according to the exchange. That compares with a typical break-even price of about $35,000 a day, according to Vergottis.

Forward freight agreements, contracts that traders buy and sell to bet on, or hedge, the future cost of transporting raw materials also slumped.

FFAs for capesize ships for the first quarter of this year have dropped 19 percent since Jan. 7 and stood at $121,500 a day, according to prices from Imarex NOS ASA, a broker of the contracts.

The contracts for panamaxes, the second-largest vessels within the index, have dropped 21 percent to $55,750 today, according to Imarex.

The Bloomberg Dry Ships Index, a measure of commodity ship owners' shares, dropped 0.4 percent to 4,265 points, taking its decline to 13 percent this week.

This news is a total 688 time has been read