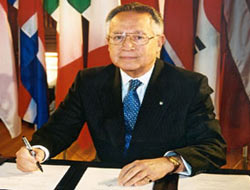 A joint campaign by ISF, ICS and ITF to promote the IMO/ILO Guidelines on Fair Treatment of Seafarers in the event of a Maritime Accident, has been endorsed by IMO Secretary-General Efthimios E. Mitropoulos.

The campaign encourages members of ISF/ICS and ITF to approach Governments to promote the Guidelines and monitor how effectively they are being implemented. Mr. Mitropoulos said that the campaign, which includes the distribution of posters worldwide to inform seafarers of the Guidelines, was fully in line with the request of IMO's Legal Committee that the Guidelines should be widely disseminated and their application encouraged.

''By the actions you are taking, seafarers serving throughout the shipping industry will not only have a clearer understanding of the fundamental elements of fair treatment in the unfortunate event they are caught up in a maritime accident, but they will also feel encouraged by the knowledge that they have the international community at their side, which, should the situation arise, is prepared and willing to pay attention to their plight,'' Mr. Mitropoulos said in a letter to Mr. Tony Mason, Secretary-General, ICS/ISF, and Mr. David Cockroft, General Secretary, ITF.

''I have no doubt that, by acting as you suggest, you will render a good service to shipping by, among other things, establishing faith in young people, who are thinking of a career at sea, that seafarers are not alone and unprotected when something goes wrong while at sea,'' Mr. Mitropoulos added.

The Guidelines say that all necessary measures should be taken to ensure the fair treatment of seafarers and recommend that they be observed in all instances where seafarers may be detained by public authorities in the event of a maritime accident.

Seafarers are recognized as a special category of worker, the Guidelines state. Given the global nature of the shipping industry and the different jurisdictions with which they may be brought into contact, they need special protection, especially in relation to contact with public authorities.

The objective of the Guidelines is to ensure that seafarers are treated fairly following a maritime accident and during any investigation and detention by public authorities and that any detention is for no longer than necessary.
The Guidelines give advice on steps to be taken by all those who may be involved following an incident: the port or coastal State, flag State, the seafarer's State, the shipowner and seafarers themselves.

The emphasis is on co-operation and communication between those involved and in ensuring that no discriminatory or retaliatory measures are taken against seafarers because of their participation in investigations.