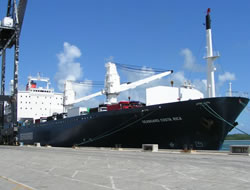 COPENHAGEN's SeaIntel Maritime Analysis predicts that weakening freight rates will put the world's top 10 container shipping companies into a collective lose of US$13 billion in 2011.

SeaIntel's forecast rests of Shanghai Shipping Exchange spot rate data and what is happening on tradelanes not involving Shanghai, based on opinions of freight rate derivative brokers.

"The top 10 container carriers are estimated to transport 35 million FEU in 2011. In the above estimation of an average rate decline of $380 per FEU, this would result in the top 10 carrier results being reduced by $13.3 billion compared to 2010. This would leave all carriers with negative results in 2011," the SeaIntel report said.

"Maersk Line has outlined in its 2010 annual report that a $100 per FEU reduction on their freight rate has an impact on the net result of around $800 million. This indicates that any decline in the freight rate is passed right through to a bottom line impact. This would be the case for the other top 10 carriers as well," said SeaIntel, an agency founded by Lars Jensen, who headed up the now defunct Maersk project, YouShip, and later became head of marketing and IT for the start-up The Containership Company.

"If we assume an average top-10 carrier has 25 per cent of the volume locked into long-term contracts at 2010 levels, and these are valid until 2012, and we furthermore assume that the trades outside the main haul only decline at half the rate of the main haul - ie, 14 per cent - then the carrier would still face an average freight rate decline of some $380 per FEU in 2011," said the report.

This news is a total 6719 time has been read