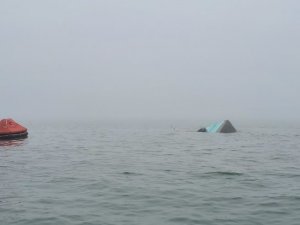 The search for two missing fishermen near Galveston was suspended Thursday after covering more than 49 square miles over three days, the Unified Command said.

The Unified Command was set up in response to the fatal collision between the 81-foot fishing vessel Pappy’s Pride and tanker near Galveston on Tuesday. A search consisting of aerial flights, shore patrols and maritime searches continued for two missing.

Vessel Traffic Service Houston-Galveston watchstanders were notified Tuesday afternoon of four people in the water after a collision between the Pappy’s Pride and the 600-foot chemical tanker Bow Fortune near the Galveston jetties. Two fishermen were recovered and transferred to medical personnel. One of the fishermen, who was unresponsive when first responder arrived, was later pronounced dead.

“It is never an easy decision to suspend a search,” said Cmdr. Jordan Baldueza, Sector Houston-Galveston search and rescue mission coordinator. “Our hearts are with the families, friends and loved ones of every individual involved in this tragic event. Responders from multiple federal, state and local agencies, as well as multiple good Samaritans, have worked tirelessly over the past three days to conduct aerial flights, shore patrols and maritime searches covering more than 49 square miles in hopes of locating these two gentlemen.”

Approximately 500-feet of containment boom has now been placed around the capsized vessel, and teams are conducting shoreline assessments to determine impact. Sheens of unrecoverable product have been reported in the vicinity. According to the Unified Command, a maximum potential of the release is 14,000 gallons of diesel fuel.

Salvage of the Pappy’s Pride will be contracted through the fishing vessel’s insurance underwriters.

Meanwhile, the Coast Guard has established a temporary safety zone near the Galveston Bay Entrance Channel within 300-yards of the sunken fishing vessel. Vessel Traffic Service Houston-Galveston has directed no meeting or overtaking, with wake and surge considerations given for vessels transiting on the Houston Ship Channel between lighted buoys 7 and 9.

“Despite the life saving efforts of our crew, the gentleman was later pronounced deceased by the medical examiner’s office,” said Cmdr. Jordan Baldueza, Sector Houston-Galveston search and rescue mission coordinator. “Our heartfelt condolences go out to the family and friends of all those affected by this tragic event. Our search and rescue efforts remain our top priority at this time.”

This news is a total 626 time has been read
Tags: collision, search and rescue, USCG