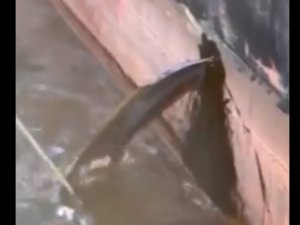 [Brief] The captain of the port at the Port of Algeciras has detained the boxship Seaspan Lahore after a fuel spill Sunday afternoon at the Isla Verde Exterior dock.

According to local outlet EuropaSur, the spill occurred due to a small crack in the Seaspan Lahore's hull. It was located on the side of the vessel facing the dock, enabling containment and spill cleanup measures. The abatement effort was declared successful and is now complete.

The vessel has been detained awaiting repairs, according EuropaSur, and the captain of the port has required a bond of $92,000 in connection with the spill.

In response to the incident, the local environmental advocacy group Verdemar Ecologists in Action issued a protest to the captain of the port, asserting that fuel spills are occurring at Algeciras with increasing frequency. "Verdemar will request . . . a report of what happened, the extent of pollution to Algeciras Bay and data from the physical parameters of the spill," the group wrote in a social media post.

This news is a total 237 time has been read
Tags: SEASPAN BOXSHIP SPILLS FUEL AT PORT OF ALGECIRAS