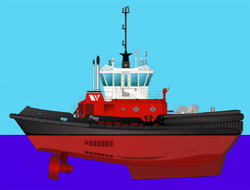 As part of its fleet revitalization program, Seaspan International Ltd., North Vancouver, B.C., has just placed an order for what it calls a "Titan of a tug."

As part of its fleet revitalization program, Seaspan International Ltd., North Vancouver, B.C., has just placed an order for what it calls a "Titan of a tug."

"This tug will be capable of generating in excess of 120 tonnes of line pull in the indirect mode, which is significant for effective escorting maneuvers," says Doug Towill, Seaspan's VP, Marine Services. "We will service both our Vancouver Harbour and Roberts Bank shipdocking customers with this new ZÐTech tractor tug, as well as any other escort opportunities in our local waters."

Seaspan says the 6,500 bhp tug will be outfitted with "the most environmentally efficient engines available, which exceed all standards."

Vancouver Shipyards, in North Vancouver, will commence construction on this exciting new venture in October 2007 with completion scheduled for September 2008. Seaspan and Vancouver Shipyards are both members of the Washington Marine Group.

The newbuild will be the largest, most powerful tractor tug to service the B.C. coast and will be the new flagship of Seaspan's shipdocking fleet, which currently incorporates seven tractor tugs and seven conventional shipdocking tugs dedicated to its local customer base.

This news is a total 772 time has been read