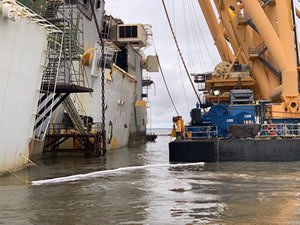 Crews finished with the second cut of the Golden Ray wreck in St. Simons Sound, Georgia on Saturday and the section now awaits lifting onto a barge for disposal, the incident command reported.

The cut section, known as Section Eight, the stern, is now being prepared for lifting onto the Barge 455-8 for transport out of the Environmental Protection Barrier (EPB) to Mayor’s Point Terminal for further sea-fastening.

The successful second cut comes after modification to the cutting apparatus to help the operation progress more quickly.

“We are confident that the time invested to implement modifications to the cutting apparatus as well as perform critical maintenance to the wreck removal equipment will contribute to a safe and efficient cutting operation.” said Incident Commander Chris Graff of Gallagher Marine Systems, upon commencement of the second cut. “We are ready to mitigate expected debris and other potential threats. The operation may be loud at times and please respect the safety zones around the wreck site.”

The previously removed bow section, known as Section One, was transported to a recycling facility in Gibson, Louisiana, aboard the Barge JULIE B. The barge is now due to return to Brunswick, Georgia and stay on standby to receive Section Two. Custom fabricated cradles on the barges are designed to receive specific sections of the wreck.

The response environmental unit continues to collect water samples in the vicinity of the wreck site in accordance with the response Water Quality Sampling Plan.

A 200-yard safety zone remains in place around the EPB and the St. Simons Sound Incident Unified Command advises mariners to please steer clear of the perimeter.

The Golden Ray was carrying about 4,200 vehicles when it lost stability and grounded in St. Simons Sound in Georgia as it departed the Port of Brunswick in September 2019. All vehicles remain inside the ship’s cargo holds and are being cut along with the wreck’s hull.

This news is a total 3770 time has been read
Tags: golden ray, marine accident news