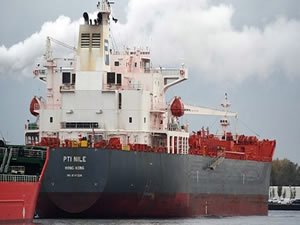 For the second time in less than twenty-four hours, there was an attack on a vessel in the Gulf of Guinea.

While it appears the crew of the second vessel was able to protect themselves, the two incidents highlight the growing threat to vessels in this area of the world.

Details of the second attack are incomplete, but Dryad Global is reporting that the product tanker, the Hong Kong-flagged 50,000 DWT PTI Nile, was approached and boarded approximately 115 nautical miles south of Lome, Togo late at night on October 17.

At the time, the vessel was reported to be heading north inbound towards Lome. She also appears to have been sailing on a parallel route to another taker the Maersk Navigation.

This other vessel was believed to be less than five miles to the west of the PTI Nile also inbound to Lome.

The reports seem to indicate that the PTI Nile detected the approach by the pirate vessel, possibly allowing them to send out a request for assistance.

Dryad reports that the PTI Nile appears to have also conducted evasive maneuvers to her starboard side before coming to a halt. Some reports stated that the welfare of the crew was unclear, but Dryad also says that it received reports that the crew had all managed to reach a secure space on the vessel and later was all accounted for after the attackers left the vessel.

A Togolese patrol vessel was also believed to be on site. Hours earlier, the LNG carrier Methane Princess was attacked by pirates off Malabo, Equatorial Guinea, and one member of her crew was kidnapped from the jetty.

The vessel had reportedly completed loading according to Dryad, but remained at anchor when it was attacked. The two attacks coming on the same day highlight the overall rise of incidents reported in the Gulf of Guinea.

According to the ICC International Maritime Bureau (IMB), there has been a 40 percent increase in the number of kidnappings reported in the Gulf of Guinea in 2020 versus 2019.

The IMB data on piracy activity in 2020 reports that 95 percent of global kidnappings have taken place in the area. Pirates armed with guns and knives are abducting bigger groups of seafarers at further distances off the West African coast the report says.

IMB warns that the pirate gangs in the area are “well organized and targeting all vessel types over a wide range.” Seafarers are being warned to use increased precautions in the area and remain alert to potential approaches.

The warning also notes that the pirates have recently conducted attacks at greater distances from shore.