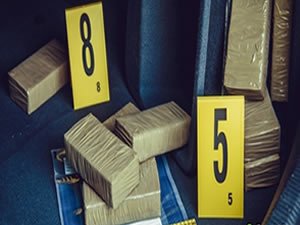 The seizure was undertaken as a joint operation by customs department officials working for the trade ministry and the local police department of the Mediterranean province of Mersin after they received a tip-off.

On the 16th of June, Turkey witnessed the largest drug seizure in its history, with 1.1 tons of cocaine being confiscated at the Mersin port in the Southern part of the country, with a street value of around $275 million.

The seizure was undertaken as a joint operation by customs department officials working for the trade ministry and the local police department of the Mediterranean province of Mersin after they received a tip-off.

According to official statements made by Murat Cihan, deputy police chief of Mersin province the drugs were recovered from a ship arriving from Ecuador, from 1000 packages being transported in banana containers.

The operation was launched after the tipoff for a drug consignment onboard a Liberia registered cargo ship was received by the customs officials.

Mr. Mehmet Muş, the trade minister of Turkey congratulated the General Directorate of Customs Protection units, for a 'successful operation' and applauded them for the largest drug in the country's history.

According to recent data, the largest drug seizure to date was from 2018 when 800 kilograms of cocaine was seized from the north-western port of Kocaeli.

In his official press release made by Mr. Cihan on Wednesday, he announced that further investigations into the drug chain were underway and assured that, "Some detentions will surely be made.”

The press release also witnessed the display of the 1000 packages of the drugs seized. Turkey, being a gateway to Europe from Asia and Africa, witnesses a large magnitude of drug smuggling.

It has been a popular route for such consignments in the past decades but the heightened vigilance and operations by the government like reward schemes on tip-offs against distribution and manufacturing of drugs, has now evolved into a strong battle against drugs.

The seizure last Wednesday was living proof of the same.

The United Nations report of drug abuse across the world in 2020 acknowledged Turkey's success in such anti-narcotic operations as it made a record number of arrests in 2020.