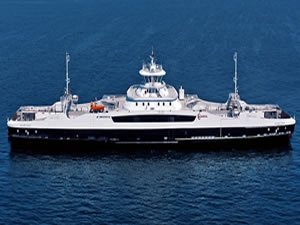 The first in a line of three full-electric sister ships built by the Turkish shipbuilder for Boreal, MALMEFJORD has a capacity of 399 passengers and 120 cars.

Boasting a 2.016 MWh battery pack, MALMEFJORD will service the Molde-Vestnes route and will be followed by TOMREFJORD and VESTREFJORD in the next few months.

The ferries have been designed by Multi Maritime.