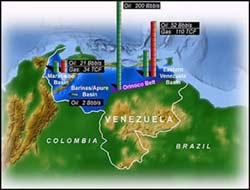 President Hugo Chávez on Tuesday celebrated the “nationalisation” of Venezuela’s last foreign-controlled oilfields, situated in the Orinoco Belt, which could contain the biggest oil reserves in the world.

President Hugo Chávez on Tuesday celebrated the “nationalisation” of Venezuela’s last foreign-controlled oilfields, situated in the Orinoco Belt, which could contain the biggest oil reserves in the world.

Mr Chávez has hailed the move as the end of the exploitation of Venezuela’s resources by multinational corporations, although the change, in effect, means only that the state will receive majority control of four heavy oil projects, reducing the stakes of ConocoPhilips, Chevron, ExxonMobil, Total, BP and Statoil, which are worth more than $15bn (£7.5bn, €11bn).

“Welcome to the new PDVSA,” Rafael Ramírez, Venezuela’s energy minister in charge of the state oil company, said to a crowd of workers. The workers had substituted their traditional blue helmets for red ones – the colour favoured by Mr Chávez’s followers – highlighting the increasing politicisation of the company.

Television footage also showed the oil workers raising the flags of Venezuela and PDVSA over a refinery and the four drilling fields.

A fly-over by recently imported Russian-made fighter jets was also planned, as well as a strong military presence. Venezuela was exercising “its right to administer its natural resources in benefit of the people”, said Mr Ramírez.

Mr Chávez also took advantage of international workers’ day to announce a 20 per cent increase in the national minimum wage. He said that the increased wage was equivalent to $286 (€209, £143) a month, “one of the highest levels in the whole of the American continent”.

However, inflation figures released for April showed a rise in prices of 1.4 per cent in the last month, causing year-on-year inflation in the last 12 months to rise to 19.4 per cent from 18.5 per cent a month earlier.

In a further sign of independence from what Mr Chávez called “mechanisms of imperialism”, he announced on Monday his intention to terminate Venezuela’s membership of the International Monetary Fund and the World Bank. This follows a similar show of bravado from Ecuador, which expelled the World Bank’s representative in Quito, after accusing the organisation of “extortion”.

Mr Chávez has also threatened to withdraw from the Organisation of American States if it condemned his decision not to renew the licence of a local television station, RCTV.

Negotiations now officially begin for increasing the state share in the Orinoco Belt oil projects to a minimum of 60 per cent, with a June 26 deadline for an agreement.

Last week, all the large oil groups involved, except ConocoPhilips, signed a memorandum of agreement to hand over control to the state. Venezuela has threatened to expropriate ConocoPhilips’ assets if it fails to comply.

The measure brings “to a definitive end the historic chapter known as the oil ‘opening’, which was no more than handing our oil over to the empire through these companies”, Mr Chávez said at the weekend.